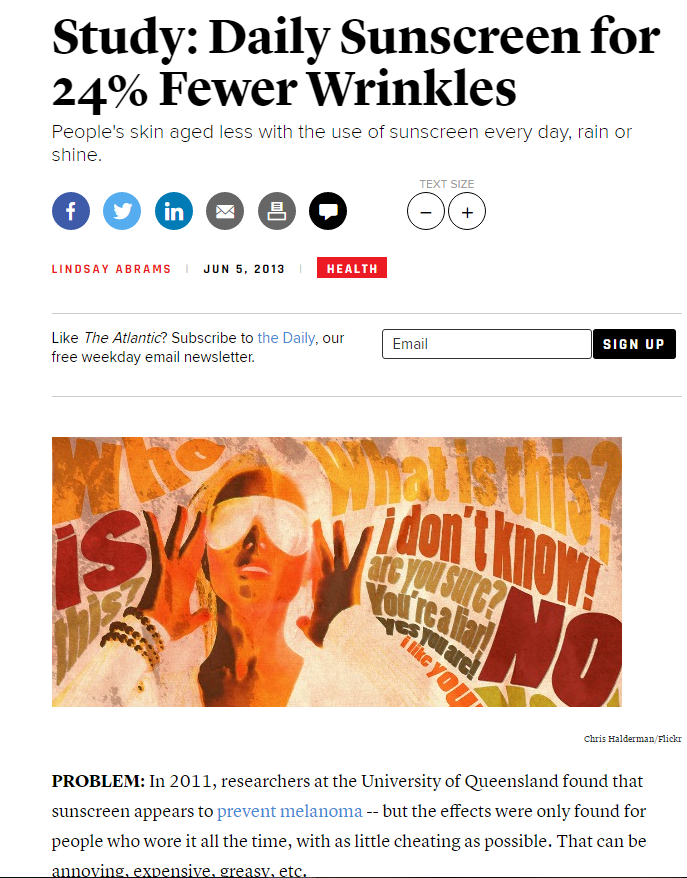 Read more about this in “Study: Daily Sunscreen for 24% Fewer Wrinkles” by the Atlantic.

PROBLEM: In 2011, researchers at the University of Queensland found that sunscreen appears to prevent melanoma — but the effects were only found for people who wore it all the time, with as little cheating as possible. That can be annoying, expensive, greasy, etc.

METHODOLOGY: Researchers revisited a subset of the same participants from the skin cancer study: 903 fair-skinned, quick-to-burn Australians under the age of 55. Half were asked to use sunscreen at their own discretion, and half were asked to apply 15 SPF every day when they woke up, and to reapply after bathing, after spending prolonged time in the sun, or after sweating a lot. They were also randomly assigned to take either a daily β-carotene supplement — a known antioxidant — or a placebo.

This went on for four and a half years, at the beginning and end of which silicone molds were made of the participants’ hands. At the experiment’s conclusion, researchers examined the molds for signs of “photoaging”: changes in microscopic lines and wrinkles that indicate sun damage.

RESULTS: Even though most of the participants reported taking measures to protect their skin and stay out of the sun, the skin of daily sunscreen users aged a full 24 percent less than that of occasional wearers. The effect only occurred for people with “younger” skin at the beginning of the study; if their skin was already damaged, sunscreen didn’t do much for them. The antioxidant supplement had no overall effect on skin quality, although the authors contend that “a small slowing or accelerating effect cannot be ruled out.”

IMPLICATIONS: This was the first randomized trial that seems to show that sunscreen protects against skin aging in humans. Added to what we know about melanoma prevention, write the authors, this may tip the cost/benefit balance in favor of taking the time to apply and reapply as often as possible. Especially since measurable results were found despite none of the participants being perfect: by the study’s end, 77 percent of the people assigned to the daily use group reported using sunscreen at least 3 to 4 times per week. Only one percent complained about greasiness.